The protracted nature of refugee situations has become increasingly common, underlining the importance of finding solutions that incorporate the economic opportunities and access to livelihoods in countries of first asylum. Indeed, we are witnessing a shift from a humanitarian assistance-based framework, which has contributed to the long term problem of refugee dependence, to a developmental framework that would promote refugee self-reliance. This shift has been aided by strategic partnerships between UNHCR and non-traditional actors, including the Ford Foundation, Trickle Up, and the World Bank’s Consultative Group to Assist the Poor. In the post, I discuss the introduction of the Graduation Approach as a way for refugees to overcome extreme poverty.

What is the Graduation Approach?

The Graduation approach was conceived as a livelihood program for people suffering from extreme poverty. It was first implemented in 2002 in Bangladesh by BRAC (Bangladesh Rural Advancement Committee) and targeted those who were so poor that they could not engage in activities supported by other livelihoods programs.[1] The Approach aims at benefiting the refugee and host countries’ communities by providing food security and sustainable livelihoods through innovative and market-based initiatives. It includes sequenced sets of interventions over an 18 to 36 months-long period and has the following phases[2]: 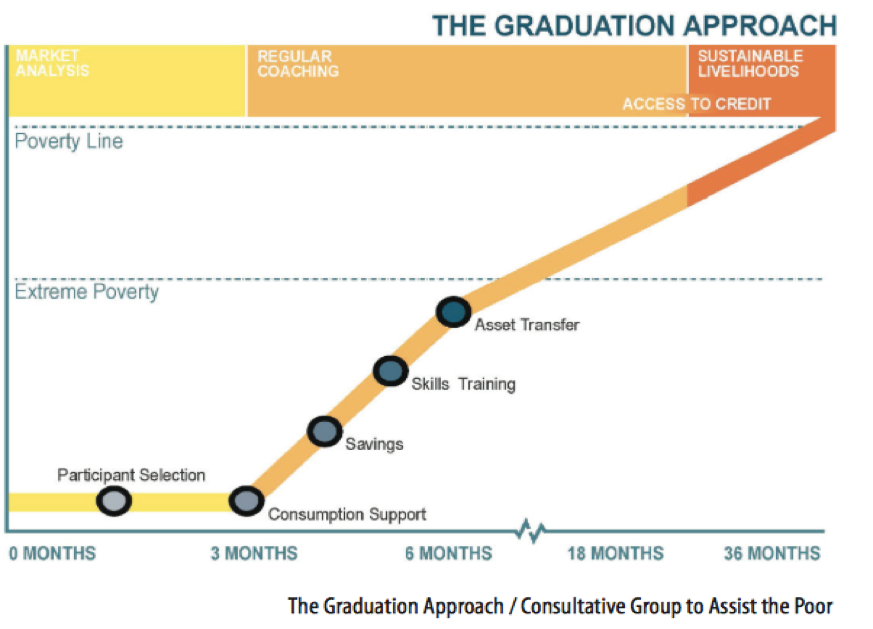 The Graduation Approach, The Consultative Group to Assist the Poor (2013)

The Graduation Approach has a positive track record when incorporated in development strategies. Poverty Action pooled data from five sites where the Graduation Approach was implemented. The data showed that the program has allowed for broad and meaningful economic impacts. For instance, in a period of two years, the participatory household’s consumption in Bangladesh increased by 7.3%, 16.4% in Ethiopia, 6.9% in Ghana, 13.6% in India and 10.2% in Pakistan. Additionally, the Graduation Approach also led to psychosocial improvements of the targeted participants; the program has allowed for: health improvements due to the increase of incomes, increase in school attendance, greater political participation – even if limited in most cases – and women empowerment through access to work.

UNHCR recognized the potential benefits of introducing the Graduation Approach to protracted refugee situations across the world, and thus decided to incorporate it in their Global Strategy for Livelihoods 2014-2018. The organization, in collaboration with local partners, launched in 2013 three pilot projects in urban and camp settings in: Costa Rica, Egypt and Ecuador.[4] The model used by the UNHCR differs from the traditional framework depending on the socio-economic and political contexts in which it is operating. For instance, the Graduation Approach deployed in Egypt operates according to a two track framework, which guides participants towards either self-employment or wage employment, and incorporates both psychosocial support for the refugees and a tailored approach to mainstream the prevention and responses to sexual and gender based violence.[5]

Graduation Criteria and Benchmarks of Success

For the Graduation Approach to be considered successful and for the participants to graduate from one phase to another, meeting a certain number of criteria are necessary. These criteria are tailored to the concerned population’s vulnerabilities and to the hosting country’s context. While the criteria will be context-specific, benchmarks have been set from previous experiences, including: no starvation caused by unavailability of food, being able to eat at least two cooked meals per day, maintenance of the savings balance, repayment of at least one loan, and a threshold for productive asset values.[6]

Egypt is a major refugee-hosting state. It was chosen as a pilot for the Graduation Approach because of large numbers of refugees in both protracted situations, mostly from Sub Saharan Africa, and emergency situations, mostly from Syria and Iraq. The pilot project was initiated in August 2013, targeting 5000 households over a duration of 28 months.[7] The project is being undertaken in collaboration with two partner organizations: Catholic Relief Services in Greater Cairo, and Caritas in Alexandria and Damietta.[8] In March 2016, Beit Al Karma Consulting conducted an evaluation to assess the impact of the Graduation Approach on the participants in both Cairo and Alexandria. The data collected by the NGO relates to both wage-employment and self-employment tracks in terms of: employment, income, and expenditure patterns.

It was reported that in the first year of the project 789 individuals found wage-employment opportunities less than three months after completion of the training phase of the program, while 657 individuals started their own businesses a month after completing training. However, recent assessments show that the majority of the participants on the wage-employment track only kept their work for a duration of 6 to 12 months, and only 46% of the self-employed participants were able to operate their businesses for more than 6 months.

Beit el Karma argues that the reasons behind the shortcomings in sustainable employment depend on a varied set of factors. Concerning the wage-employment workers, the reasons behind their relatively short stays in their jobs are: transportation costs due to the distance between their home and their workplace, the work requirements that are lower than the refugee’s qualifications and sexual harassment. In regards to the failure of the businesses, findings show that the main reasons are: existing competition due to a lack of understanding of market demands and existing services, lack of competition protection, limited funding and business networks, and poor marketing skills.

The 2016 report shows that participants on the wage employment track tend to gain more money than those who started their own businesses. The average incomes for male and female participants, respectively, are 1204.5 EGP and 1295 EGP for wage employment work and 1078 EGP and 786 EGP for participants on the self-employment track. Despite a significant increase in the average of the income levels, 95% of the participants surveyed stated that their income still does not cover the entirety of basic needs expenses, leading them to take loans or borrowing money from their extended network.

The report concludes that despite the shortcomings mentioned, the pilot program has had a positive impact by promoting self-reliance and improving livelihoods in a sustainable manner. The initiative has allowed the majority of the participants to graduate from extreme poverty to mild vulnerability. The report recommends that the program could be strengthened by providing mentorship and services tailored to the socio-economic and political context of the country within which it is operating.

Could the Graduation Approach be the Solution to Refugee Self-Reliance?

The main hurdle in achieving long term success when implementing the Graduation Approach in countries of first asylum is ensuring the right to work and the freedom of movement of refugees.[9] Both rights, despite being explicit under international law, are often restricted in countries of first asylum where the labour market is perceived as saturated and the level of unemployment of nationals is already high.

This obstacle can be overcome over time by creating a constellation of local partners and by promoting a new narrative on the impact of refugees in a host country that would emphasize the benefits of hosting refugees. Yemen provides an example. In 2010, UNHCR in collaboration with its implementing partner, Intersos, and the Yemeni Ministry of Technical Education and Vocational Training offered refugees access to formal training and technical education over a period of five years. In exchange, UNHCR funded the renovation of two vocational training centres and equipped them with relevant technologies. This pilot project ended up benefiting both the refugee communities and national students; it also underlines the incorporation of considerations of host communities when developing livelihood strategies for refugees.[10]

The unpredictability of funding presents another hurdle. Funding for livelihood programs is undermined by two factors: humanitarian programs are often prioritized due to their emergency nature, and livelihoods programs are frequently subject to the “shifting political winds and resource demands” of donors. [11]  Demonstrated success of new strategies—such as the Graduation Approach—should persuade funders to provide sustained investment in livelihood programs.

[6] CGAP, Pathways to Self-Reliance for Urban Refugees in Egypt (June 2015)

[7] Trickle up estimates an average of 4 people per households

One thought on “The Graduation Approach: the Key to Sustainable Livelihoods for Refugees in Countries of First Asylum?”

This site uses Akismet to reduce spam. Learn how your comment data is processed.